Ride For Kimura: Making cycling safe for all

Decked from head to toe in professional cyclist gear, a cyclist rides furiously along the road shoulder, possibly training for his next big event. Back hunched almost in stealth mode, his legs pump the pedals. He braces the wind and embraces the speed as he whizzes confidently past motorists.

This is not an uncommon sight today. With more cycling events popping up, Malaysians have become bolder and more competitive. Gone are the days when cycling is reserved for leisure rides around neighbourhoods, parks or to and fro the grocery store. With the launch of the oBike, more and more of the public are opting to cycle instead of drive. And why not, especially when the health benefits and environmental friendliness of cycling are considered? However, despite the rise of competitive cycling in Malaysia, we still lack proper facilities and spaces for cyclists to train. Highways and busy main roads that lack proper cycling lanes have become the only available option, leaving many at the mercy of speeding and inconsiderate motorists who do not respect the space and boundaries of cyclists. While countries like the Netherlands are currently paving the way towards creating a more cyclist-centric society, some in Malaysia are still unwilling to welcome the idea of motorists and cyclists co-existing. What will it take to get all travelers on the same page when it comes to responsible road use? 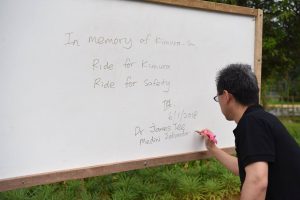 Recently, residents of Johor have begun campaigning for cyclist and motorist safety following a tragedy involving Japanese cyclist Shunsuke Kimura. The Singaporean citizen was riding with friends when he collided with a vehicle and lost his life. His death shook the cycling community in Johor Bahru; people who knew Kimura knew he was a skilled and experienced cyclist and triathlete.

The accident was a wake-up call for cyclists, prompting an urgent call for authorities to look into the safety aspects or the lack thereof in Johor. Spearheaded by Dr. Sharifah Shahirah and supported by passionate cycling clubs in Johor Bahru, the Ride For Kimura campaign was formed.

Ride For Kimura was set to trigger a new wave of thinking on the road — cyclist safety is a serious matter and communities must work together to prevent similar accidents from happening again. To help spread the word, 1500 public service stickers were distributed with hopes that it will encourage motorists to practice driving a safe distance around cyclists. “Kimura’s accident could’ve been avoided,” says fellow organizer and member of the Happy Riders Cycling Group, Stephen Ngu. “There was a problem and something needed to be done.”

Stephen notes that the same interchange has claimed another life in the past. He mentions the dire need for proper facilities, bike lanes and visible yellow lines for cyclists in the area while emphasizing the importance of educating the public to respect our friendly two-wheelers.

Improved facilities will only encourage more people to cycle. However, a total mindset change needs to happen to facilitate a permanent practice of road safety amongst Malaysian road users. Stephen further highlights the need for motorists to keep a 1.5-meter distance from other vehicles on the road.

“Cycling safety is not only important for those who are competing but for the kids who use bicycles as a mode of transport to and from school,” he stresses. He believes that cycling should be encouraged and hoped that Johor will one day be a safe haven for cyclists.