One year on, how is this bamboo installation series on Puteri Harbour doing? Konstruk curator Lisa Foo has all the dirt on working with bamboo in Iskandar Puteri.

If you stroll along Puteri Harbour, you will find yourself amid bamboo sculptures that grace the promenade with their massive wonder. These form part of Konstruk, a two-year public art programme and placemaking initiative to commemorate the tenth anniversary of economic development region Iskandar Malaysia.

Konstruk was conceptualized and managed by labDNA, an urban design practice specializing in creating engaging public spaces. Curated by designer and installation artist Lisa Foo with Nani Kahar of labDNA, it comprises installations by 15 artists and architects from ASEAN region. The project began in mid-July 2015 and was showcased at Iskarnival 2016 and 2017.

Trained in architecture, Lisa Foo practices design independently. She has collaborated on various notable art and design projects, including George Town Festival headliner “Moved By Padi” and award-winning installation “Walk in the Park” at Kuala Lumpur Art in the Park Festival.

We spoke to Lisa to find out more about Konstruk, pre- and post-completion.

What is Konstruk and where did all the bamboo come from? 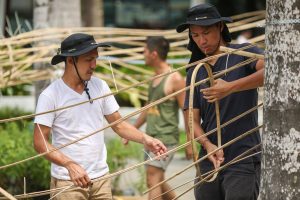 The idea of Konstruk is to promote bamboo as a sustainable and alternative construction material. Bamboo is the fastest growing plant in the world. Through the installation, the art showcased the possibilities of using bamboo as aspirations for architects, artists and artisans.

There was no precedent of creating such a huge scale of public art installation using bamboo in Malaysia. Since the supply of bamboo is usually from Indonesia, China or Thailand, we travelled around Malaysia, including Sarawak, to find local bamboo. Our search eventually led us back to Johor, where we found a supplier of bamboo from Pontian. As it is local to Konstruk, all the bamboos used in building the sculptures were locally harvested from Pontian, Johor.

Bamboo installation art in regional festivals usually last for only 1 to 3 months. Konstruk was commissioned to stay for 2 years.

There are many regional talents involved in Konstruk, including artist Leeroy New who shot to international fame upon collaborating on a dress by Lady Gaga in her music video for “Marry The Night”. How were the collaborators and installations in Konstruk selected?

We first began by researching of artists and architects in the ASEAN region. From there, thirty candidates were shortlisted and invited to submit proposals, which were reviewed and selected by a panel of curators from labDNA, UEM Sunrise and Khazanah Nasional. You can read more about each selected artist and architect on the official Konstruk website.

In your Tedx Sungai Segget talk, you mentioned that there was a sharing of knowledge on using bamboo among the artists and architects of Konstruk. Could you share some of the transferred knowledge with us?

We’ve seen many pictures of Andi Ramdani’s “Katakan Cinta” crop up on Instagram. How has the public responded to these art installations so far? 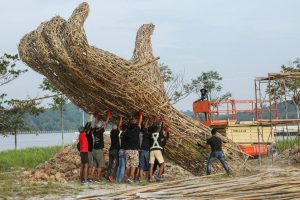 We received very positive reactions and feedback from the public; many were impressed by the sheer scale of the installations as well as the creativity involved in manipulating the bamboo. Many families or couples enjoy walks among the installations and even take selfies. Puteri Harbour has also grown increasingly popular for wedding photoshoots.

I believe that public art provides a respite by allowing us to experience our cities in more imaginative ways. By combining nature and public art installations within a city landscape, a space is created in which we are able to encourage appreciation for the ecosystem.

How has Konstruk added to the aesthetic value of Puteri Harbour, in terms of bringing the natural environment within the city landscape?

Puteri Harbour has been around for a decade by the time Konstruk was completed back in 2016.  Most of the developments are high-rise buildings made of concrete, steel and glass. Konstruk serves to contrast these developments, thus softening the landscape.

Besides installations, have you considered sharing knowledge on utilizing bamboo in fields such as crafts and furniture-making with the public? 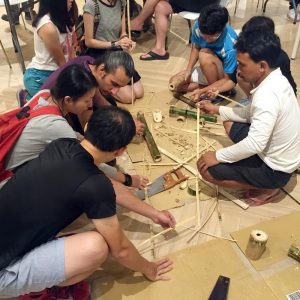 We have conducted a couple of public workshops with Eko Prawoto and Andi Ramdani who demonstrated their way of using tools and working with bamboo. We hope to have more of these workshop sessions in the School of Sustainability (SOS) at Educity Commons, Iskandar Puteri which is set to open its doors soon.

What is the most meaningful and memorable experience from your involvement in Konstruk?

It was to see our local Konstruk team, made of young local Johoreans, to play a supporting role during the construction of each bamboo installation. They worked closely together with the architects, artists and artisans from each country. Besides showcasing regional talent, Konstruk also aimed to build capacity locally.

By the end of the project, all of us learned different skillful ways of handling and constructing bamboo using manual tools from the bamboo craftsmen of the ASEAN region. Hopefully, Konstruk is able to encourage more sustainable architecture, public art installations, and materials within the construction and crafts industry by supporting locally-farmed, -supplied, and -treated bamboos.

Written by Wendi Sia. For more information on Konstruk, head over to Facebook and visit the official website! Konstruk is located in the Puteri Harbour park and is open to the public at all times.